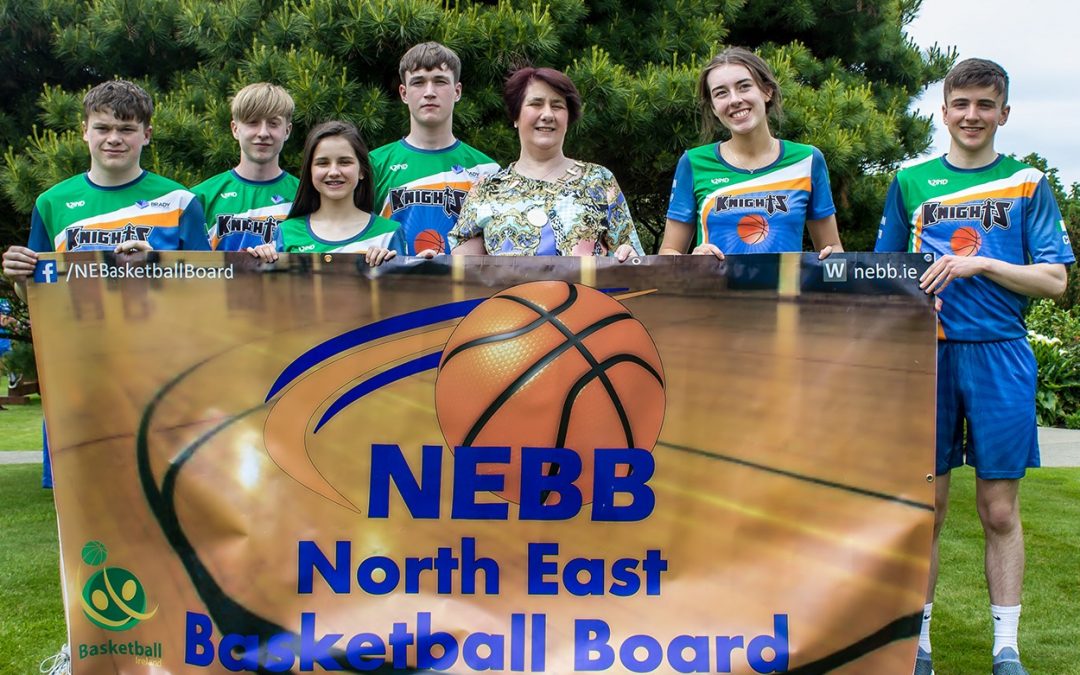 The big day has arrived for basketball players in the North East who are travelling to Spain to represent their region at an international basketball tournament there, as part of the North East Basketball Board’s (NEBB)’s development programme.

The U16 and U18 Girls and Boys North East Knights squads will travel to the Costa Brava in Spain to participate in the  EUROBASKET BASKETBALL FESTIVAL 2019 along with teams from across Europe. A total of 44 players from  10 different clubs in Cavan, Louth, Meath, Monaghan and Westmeath are involved in the squads with 7 from Dunshaughlin Rockets – Cormac Curtin, Jane Larkin, Sorcha Malone, Tom Smyth, Cian Rooney, Matas Macilius and Hilary Larkin will travel to the seaside town of Lloret de Mar with their team mates to take part in a 5 day festival of basketball, as well as have the opportunity to experience the culture and scenery of the area. The teams will play over the course of 5 days from 1st  to 5th July, facing opposition from Spain, France, Sweden, Iceland and Britain to name but a few. While in Lloret de Mar the teams will be accommodated in a central hotel and, in their limited free time will have the opportunity to enjoy the specially range of social activities of the tournament as well as visit the beach and enjoy the sunshine. The tournament opens officially on Sunday 30th June with the Opening Ceremony in the Palasport El Moli stadium.

A 9 person strong team of coaches, managers and other personnel from clubs in Cavan, Louth, Meath and Westmeath will be supporting the players.

The team managers and coaches are looking forward to the players and themselves experiencing basketball at European level and having the opportunity to play and watch teams from some of the strongest basketball nations in the world. The whole experience should be a significant building block for the development of basketball in the North East.

Trials for the four teams began in January with team selections taking place in February. Since then the players, along with their coaching and management teams having been meeting up for regular training sessions and challenge games. This has taken players to halls in Athboy, Carrickmacross, Cavan, Dundalk, Dunshaughlin, Mullagh, and Streete

There are of course many expenses connected with a trip of this nature including team kits, kit bags, ‘walk out gear’, medical kits etc. Whilst a lot of fundraising has been undertaken by the players and their clubs the trip would not be possible without the financial support of a number of sponsors for which the NEBB is very grateful – the committee would like  to acknowledge the financial support of O’Reilly Hoofcare, Noel Larkin & Associates, Easons of Navan and Mullingar, Brady Management Global, as well as all those who have contributed financially to the venture who don’t want any public recognition.

Last weekend players enjoyed a team building weekend in the Carrickdale Hotel outside Dundalk where they were presented with their team gear and kit bags. The teams were delighted to be joined on the day by Theresa Walsh, President of Basketball Ireland, who encouraged the players to do themselves proud and embrace every moment of their experience in Spain.

The North East Basketball Board(NEBB) is the official Area Board of the North East, as recognised by Basketball Ireland, and is responsible for the development and promotion of basketball in Cavan, Monaghan, Louth, Meath & Westmeath. The Board runs leagues for juvenile teams from U12 up to U18 as well as senior men’s and ladies’ leagues. There are also U14 Boys and Girls Knights development teams which have also represented the North East  this year, and the NEBB looks forward to expanding its development programme in the future.

Last year was the most successful trips in terms of silverware, with all of the teams winning the tournament finals. This year’s U16 and u18 squads have been working hard for the Eurobasket tournament, but no matter what the outcome on the court, this trip will be an experience of a lifetime for this enthusiastic squad of players and mentors. Basketball in the North East should continue to thrive into the future.